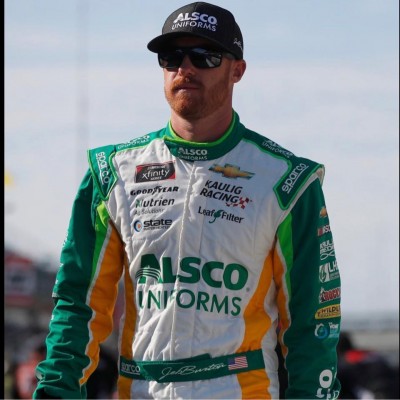 Growing up as the son of NASCAR legend, Ward Burton, it was only natural that going fast was all Jeb Burton had ever known. In 2008, Burton began his professional racing career at the age of 16 in what was known as the NASCAR Whelen All-American Series at South Boston Speedway. Close to his hometown of Halifax, Virginia, Burton continued to move up in competition at South Boston Speedway to drive in the Late Model Series, where he earned Rookie of the Year honors.

2012 marked the year that Burton moved into one of NASCAR’s premier series, as he made his first start in the NASCAR Gander Outdoors & RV Series (NGORTS). The following year, he competed in his first full season and earned his first win at Texas Motor Speedway, as well as seven pole awards, five top-five and 11 top-10 finishes.

Burton recorded only two starts in the NASCAR Xfinity Series (NXS) before making his NASCAR Cup Series (NCS) debut in 2015 at Atlanta Motor Speedway. He went on to make 33 NCS starts and 43 NXS starts between 2013 and 2020, with a best finish of second at Richmond Raceway in the NXS in 2020.

2021 will mark Burton’s first-ever full season in the NXS, as he competes for a championship with Kaulig Racing alongside teammates Justin Haley and AJ Allmendinger.

Away from the race track, Burton enjoys hunting, fishing and the outdoors. His love for conservation and land management led to the creation of “Crossroads with the Burtons”, an outdoor series featured on the Sportsman Channel highlighting the life of the outdoorsman and NASCAR driver.